But you know what? Having lived with the software for a while now, the feature that's stood out the most to me is something far less conspicuous. It's not something I ever expected to care about or use myself, in fact, despite its undeniable significance for some people.

It's a new system-level function called Live Caption. It's actually designed to be an accessibility feature, built primarily for folks who are hard of hearing. But just like other Android accessibility features, it has the potential to be broadly useful for just about anyone.

What Live Caption does is simple: When you activate it — by tapping a box that appears beneath the volume controls whenever any type of media is playing on your phone — it puts a box on your screen with a live, real-time transcription of everything that's being said. 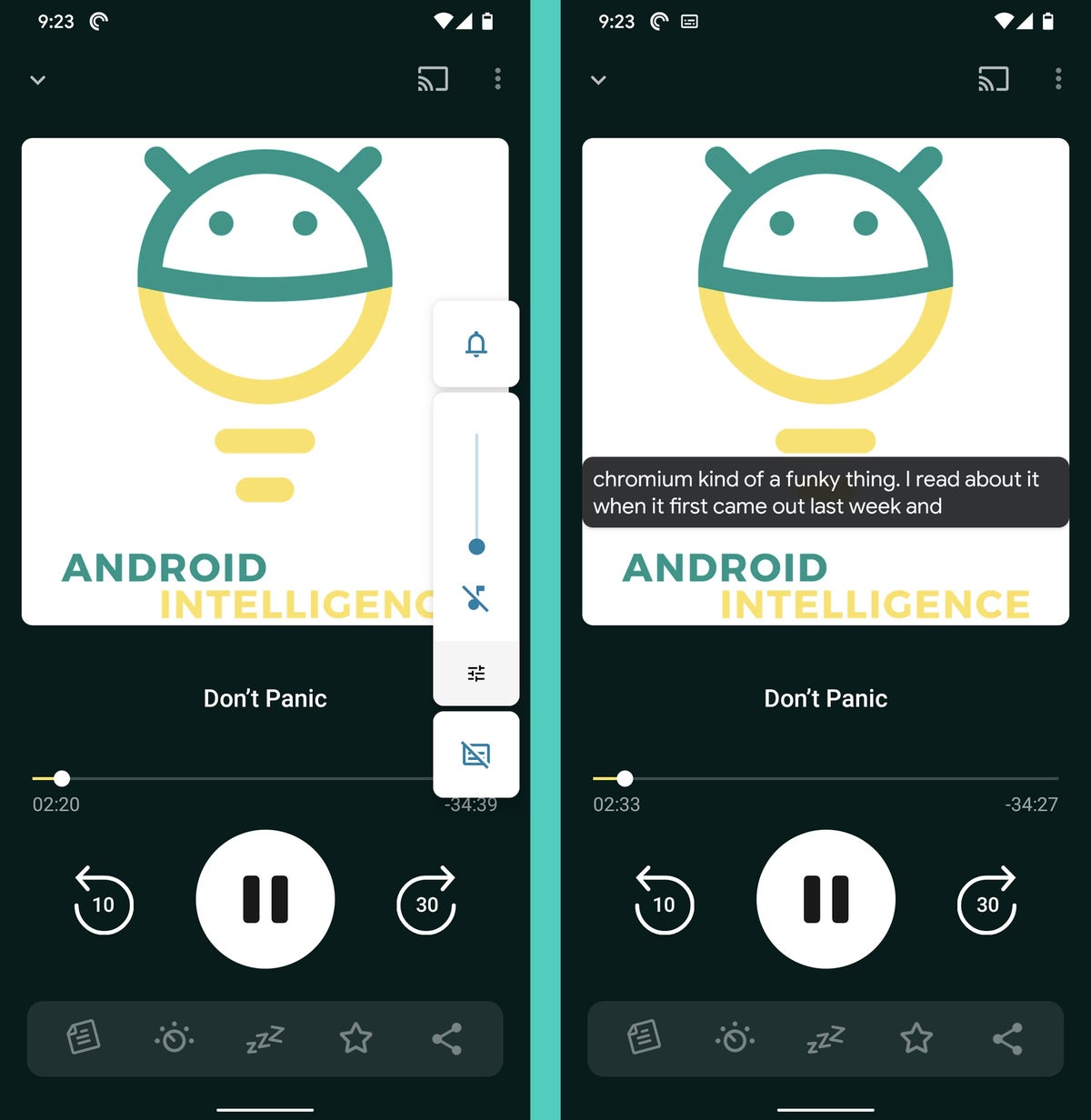 Flip the switch in the volume panel (left), and ta-da: Instant real-time captioning of anything, including an exceptionally engaging podcast (right).

The utility for people who have trouble hearing is obvious, and that in and of itself is immeasurable. But the broader benefit for anyone, as I've discovered, is that the Live Caption system makes it possible to see what a video's all about or even to "listen in" to part of a podcast without having to have any actual sound blaring from your phone.

When would that matter, you might be wondering? Well, picture this: You're sitting somewhere relatively quiet — a place where only a barbarian would be boorish enough to blare audio from their phone with complete disregard for the people around them. Maybe it's a restaurant, maybe it's a bus, maybe it's a lecture, or maybe it's your own home in the evening whilst someone else is slumbering nearby. And you don't have any headphones handy or hooked up to your cellular telephone apparatus at the moment.

When you're in such a situation — and you're the cordial sort who still has some sense of decency — Live Caption gives you an easy way to consume video- or audio-oriented content without having to impose on everyone around you.

I've had this come up when I'm in that very sort of scenario and I encounter a video on Twitter I'm interested in seeing, a video-based news story that doesn't have any text alongside it, or an audio-only clip of a conversation I'm curious to hear. Being that I'm at least somewhat civilized (even if only a little), I wouldn't dare just blast the audio out loud from my phone and remain oblivious to the sighs and glares of everyone around me, as so many people seem to do these days. (If you're one of those people, stop whatever you're doing and go flick yourself in the nose immediately — then please, for the love of humanity, reevaluate your choices.)

Well, now, I have an answer that doesn't require me to either toss aside societal norms or avoid playing the clips altogether. Instead, I turn the volume all the way down on my phone, start playing the clip, and then tap the Live Caption button in my volume control.

And just like that, I can read along with the video or audio as if it were a text-based article. 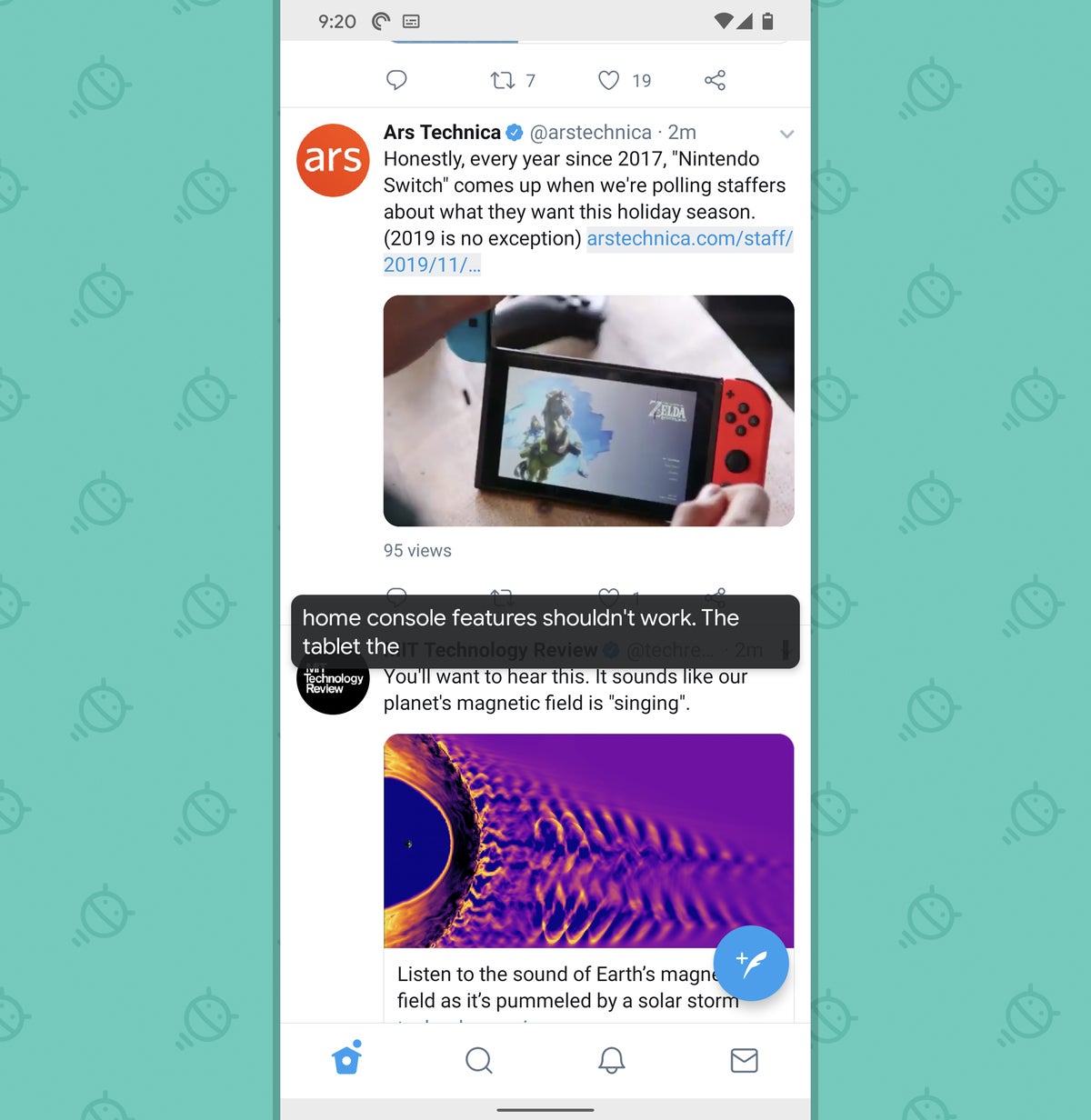 Live Caption at work with an inline Twitter video.

I don't have to stick with that tiny little box that pops up by default, either. A couple quick taps on it, and bam: It's expanded into a larger, more-pleasant-to-follow-along-with view. 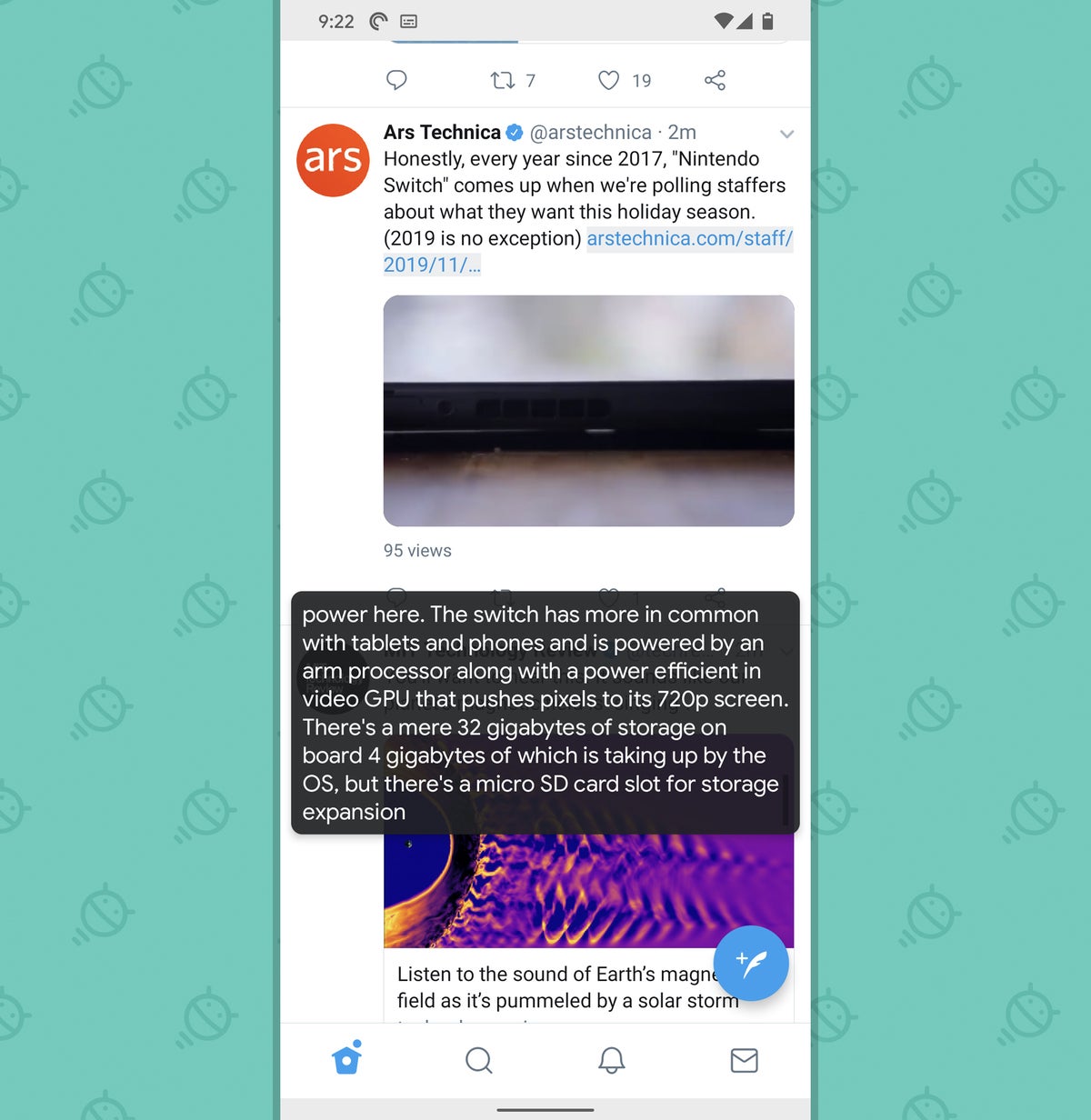 A couple quick taps gives you a larger reading area.

If you're able to hear without issue, it's easy to write a feature like this off as something you don't need. Heck, you might not even give it a second glance. But lemme tell ya: I've been relying on it way more often than I would've expected. And it's quickly becoming one of my favorite Android 10 features — a small-seeming detail that makes a meaningful real-world difference in what my phone's like to use.

Live Caption is available only on the Pixel 4 as of now, but Google says it'll be rolling out to the Pixel 3 and 3a phones later this year and then to other Android devices sometime in 2020.

When it shows up on your phone, take my advice: Don't let its accessibility branding fool you. Make yourself a mental note that it's there and then remember to tap into it when the right moment arises.

It truly will change the way you use your phone — and maybe, just maybe, also change the level of undetected glaring being aimed in your direction.