Dropbox this week launched a collaboration hub designed to let users work together around a variety of documents, another step in the company’s evolution beyond cloud file-sharing into something more focused on productivity.

The San Francisco-based company initially revealed plans for its revamped application –  now called Dropbox Spaces – in June, along with a new desktop app.  Spaces acts as a shared folder for teams that combines documents from a range of sources in one place, with the ability to chat with colleagues and assign tasks. The new-look Dropbox and desktop app also connects with various third-party video and text communication platforms.

The rollout of Spaces edges the company into closer competition with the likes of Slack, Microsoft Teams and other vendors that all aim to be the central app employees spend most of their day using.

[ Related: 10 ways to get the most from Facebook’s Workplace ]

“Dropbox is moving out from beyond the folder, from that popular file-sharing product to an enterprise platform that is creating a smart workspace and supporting ecosystem,” said Wayne Kurtzman, a research director at IDC.

At a launch event Wednesday, Dropbox CEO Drew Houston said the changes to its core platform will help office workers manage the influx of information they get during the work day. The numerous apps that workers now rely on have become a distraction and can negatively effect productivity, he said. 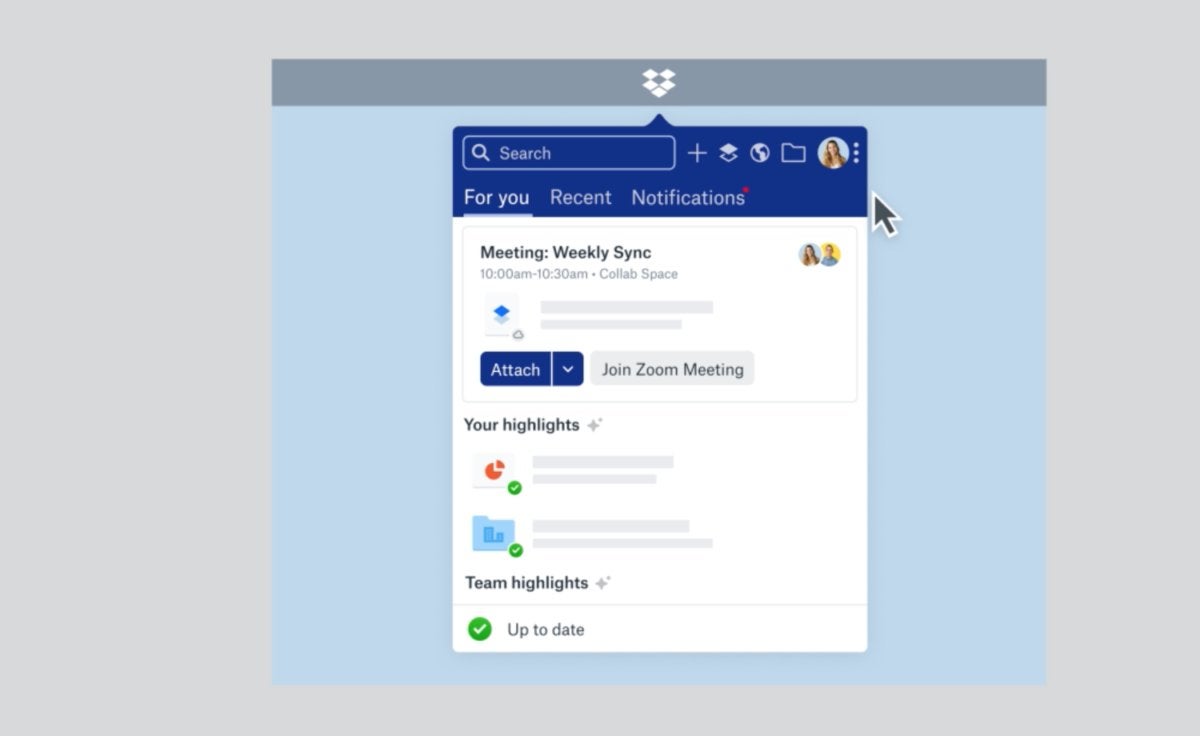 Dropbox says Spaces can help workers better focus on the task at hand.

“We started asking what if Dropbox could evolve into a new type of app that helps other apps work better together,” said Houston. “What if your workspace, which today is just this whole rat’s nest, knew how to organize itself? What if it actually helped you focus rather than distracting you? …What if your workspace was actually smart?

“Well, that is exactly what we’re building: the smart workspace.…”

Dropbox offers a variety of pricing plans for individual users or teams. A limited Basic version is available for free for individual users, with Plus ($9.99 per month) and Professional ($15.68 per month) tiers adding more storage and additional features such as Smart Sync and offline access, as well as enhanced support.

Pricing for Dropbox Business starts at $12.50 per user per month, and includes admin features such as two-factor authentication, an admin console and file recovery. Advanced ($20 per user per month) and Enterprise (pricing available on request) tiers offer enhancements such as unlimited storage and personalized support.

In addition to announcing the availability of Spaces, Dropbox offered details of new features to come. That list includes integration with Dropbox Paper, the company’s collaborative word processing tool, which will be accessible alongside Google Docs and Microsoft Office files in Spaces. Also on the way: integration with Atlassian’s popular work management application, Trello, that lets users add Dropbox content to Trello cards, and integration with e-signature app, HelloSign. 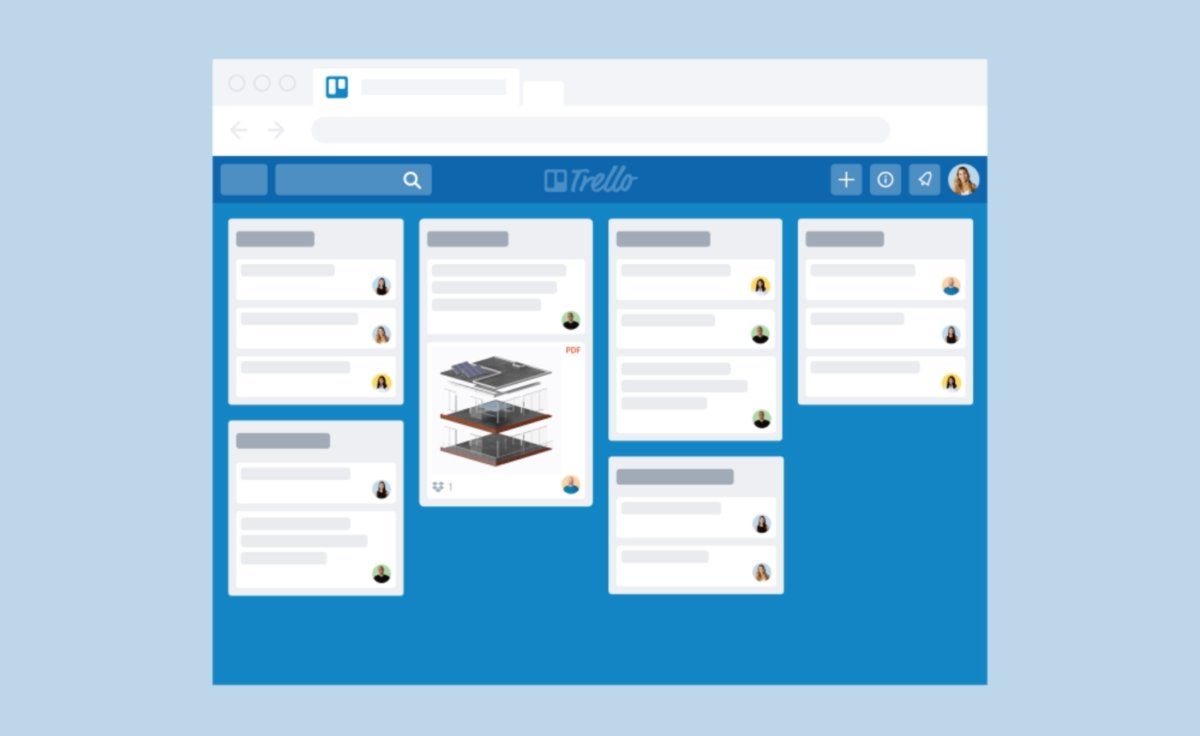 There are also a number of artificial intelligence-based features to help users manage files more effectively and stay on top of colleagues working in Spaces.

Team highlights provide an overview of the colleagues’ activity, such as updates to documents, while Dropbox’s machine learning capabilities have been applied to suggest content for users when they need it – for example, information that might be needed ahead of a scheduled meeting. 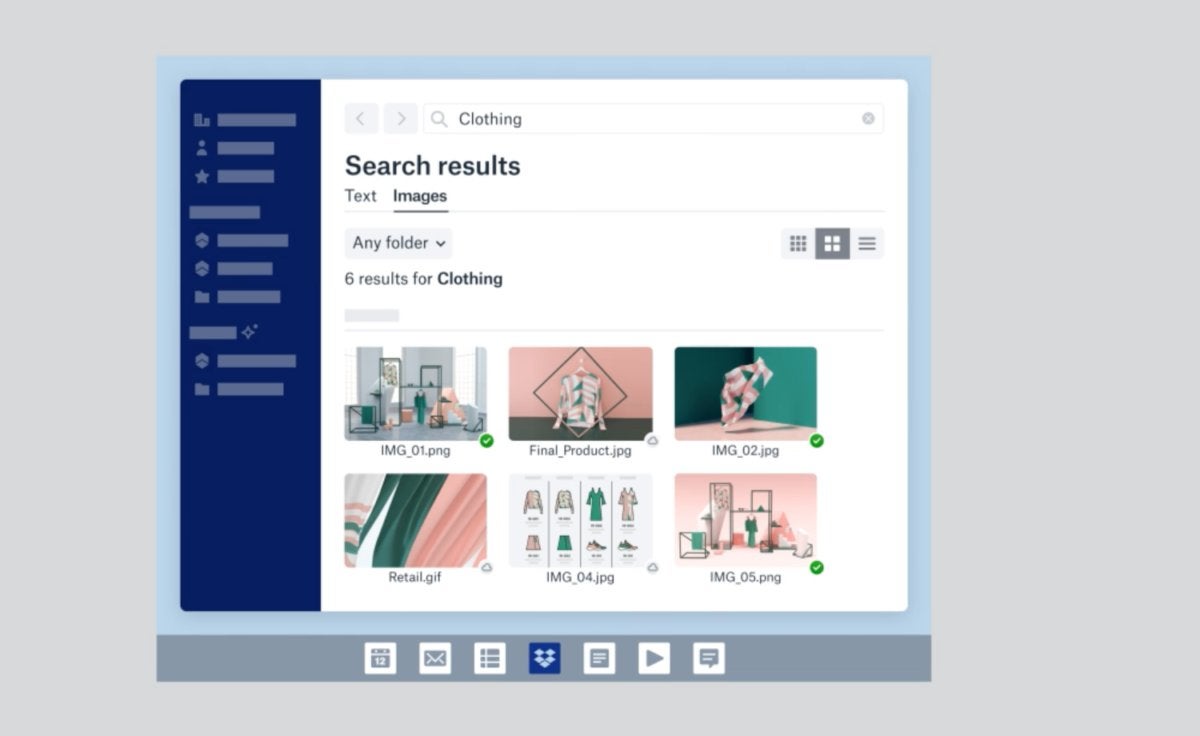 Image search allows for searches based on a description of the content.

Image search lets users seek out images using a description of the content – such as “clothing” –   rather than relying on a file name. It will also be possible to track down text documents by searching for key phrases that occur within a document, including PDFs.

Kurtzman said Dropbox has spent a lot of time and money on AI initiative, dubbed DBXi, which is “starting to pay off with this release.

“Their focus has advanced from file storage to the content and collaboration that enables work to get done,” he said. “Their ‘graph’ leverages signals from connections, work teams and integrations that result in a smarter workspace, including image recognition for photos, and signatures through their HelloSign acquisition.”

Among the other features unveiled are previews for files, including AutoCAD documents that can be viewed from the Spaces desktop app – even if a user doesn’t have the native application installed – and Dropbox Binder, which lets users collate documents, images, PDFs and more into a single place.

Kurtzman noted that some users may prefer the original and more simplified Dropbox file-storage structure. Dropbox will continue to function as a simple file sync-and-storage platform.

“People not ready for a more intelligent workspace may yearn for the Dropbox that just stored files and just worked,” he said. “It still does that. Some users will take longer to adopt, just as they did when they finally updated to a smart phone.”

The revamped software marks the latest step in the company's evolution into a collaboration business.

"This is a significant change for Dropbox that further positions it as a collaboration player," Raúl Castañón-Martínez, a senior analyst at 451 Research, said in June when Dropbox first talked up its plans. "Dropbox has naturally gravitated to collaboration; this is how users instinctively use it, as a repository where collaboration workflows start. The redesign however, makes it official: Dropbox is staking a claim as a destination where work gets done."

The desktop app seems like a "natural evolution" for the company, Larry Cannell, a research director at Gartner, said at the time. "Documents are a core focus of many teams' online collaboration. However, teams need more than documents. They also track tasks, share feedback and need to keep tabs on what others are doing.”