When I first heard about Google's Pixelbook Go laptop, I honestly didn't know what to make of it.

I mean, really, can you blame me? By most meaningful measures, the Pixelbook Go is a less premium and versatile version of Google's existing, now-two-years-old Pixelbook model. It trades its predecessor's sleek and sophisticated vibe for a more mundane and less attention-grabbing appearance. (Seriously, I own the original Pixelbook, and no exaggeration: It gets noticed and commented on all the time — a mixed-bag side effect for an introvert like me.) And in most of its variations, the Go ditches the high-res, pixel-packed screen once closely connected with the Pixel brand name (see what they did there?) and instead uses a run-of-the-mill 1080p panel.

Not only that, but as this week's Google event confirmed to us, the Pixelbook Go won't have its predecessor's shape-shifting, screen-swiveling form — the laptop's handy ability to switch from being a regular computer into being a tablet or, better yet, a tablet with a built-in stand to keep it propped it up for ergonomic video viewing. It won't support a stylus, either, and it comes with half the amount of local storage as its sibling in the base-level configuration.

Yes. I did the cloud storage kind of spices has long been position

This is supposed to be the sequel to Google's crown-wearing Chromebook?

By all counts, from the moment we first heard about the Pixelbook Go, it seemed like a downgrade — a progression that pushed the Pixelbook product into a different and decidedly less luxurious class. I mean, sure, there are a handful of areas where the Go one-ups the original Pixelbook, but none seem especially significant:

This is all relatively incremental stuff — the natural sorts of progressions you expect to see in a two-years-later model. It's all perfectly pleasant, of course, but particularly with the various form-related regressions in the equation, it's nothing that seems to justify the laptop's position as a successor to the throne.

So why does the Pixelbook Go exist? How could this possibly be the Pixelbook's sequel? What in the world is Google trying to accomplish by taking its Chrome OS masterpiece and scaling it back into a generally less impressive structure?

When I first started chewing over the Pixelbook Go as the result of the detailed leaks a few weeks ago, there was only one possibility I could think of that made any of this make sense. As I wrote in my Android Intelligence newsletter at the time:

The big unknown here is pricing, and that may be the clue that tells us what Google is really trying to accomplish with a device like this. If the Pixelbook Go (a) ends up being what we expect and (b) ends up having a price tag that's significantly less than its luxury-level older sibling, it could be a play for more budget-conscious Chromebook buyers. If not, well, I'm scratching my head.

And guess what? Sure enough, the shekels are the answer — and the initial interpretation of the Pixelbook Go as a successor to the original Pixelbook was simply off the mark. No more head-scratching required (thank goodness; my scalp is really starting to smart).

The Pixelbook Go starts at $649 — not budget-level terrain, by any means, but right smack dab in the juicy middle of midrange-laptop territory. It's a massive departure from the original Pixelbook's $999 price, without a doubt; with a third of the cost cut, a Google-made laptop suddenly has the potential to appeal to a whole new field of prospective buyers.

Not everyone, after all, is willing or able to drop a cool grand on a top-of-the-line computer. That's territory for tech-appreciating enthusiasts and people who don't mind paying (and are able to pay) more for the niceties of a premium-caliber laptop experience.

Heck, Google itself even spelled it out: While talking about the positive reception of the original Pixelbook, hardware design head honcho Ivy Ross relayed that her team had been working to bring a Pixelbook-like experience "to even more people at an even more affordable price." The phrase "affordable price" came up again a few moments later.

And that's the real story with the Pixelbook Go: It's all about expanding Google's hardware horizons. It's all about getting more people on board with a Chrome OS experience that, critically, has Google Assistant at its core in a way no third-party Chromebook can currently match. (Remember that whole post-OS era thing?) And if Google has to back down a bit on its original "Pixel brand is all about premium, top-of-the-line hardware" philosophy to make that happen, well, so be it.

It's the same basic move Google made with its Pixel 3a phone earlier this year — shedding some of the prestige in order to expand its horizons. In fact, just like with the Pixel 3a and its more expensive sibling, the higher-end Pixelbook model will continue to exist as an option. Google even put up a page comparing the two devices on its official store site. The Pixelbook Go isn't a replacement for the Pixelbook, in other words. It isn't a sequel, and it isn't a successor. It's simply a less premium alternative version of the same basic product. 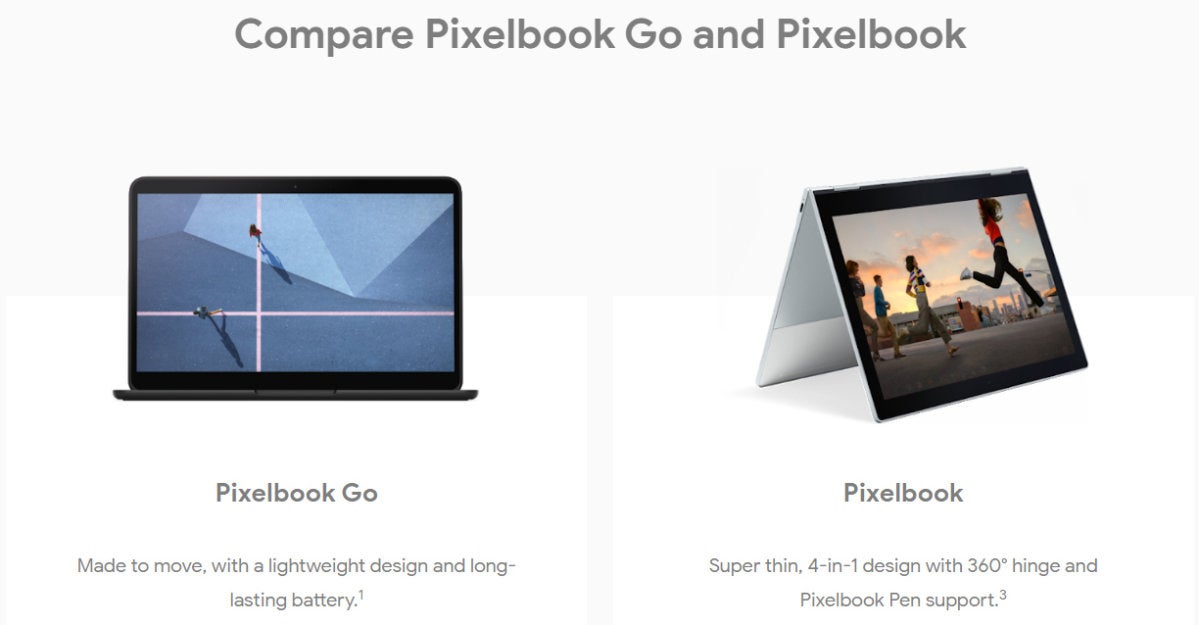 And you know what? Seeing Google spread its wings and start to offer products in more diverse price ranges not only seems sensible — it seems inevitable. On the surface, Google may be selling hardware, but what it's really doing is selling the Google ecosystem in a laptop- and phone-based form. And the more people it manages to pull into that umbrella (ella, ella), the more successful it'll be — no matter how much money it makes on the hardware in a short-term sense.

The Pixelbook Go finishes the expansion Google started with the Pixel 3a phone earlier this year. The only question left is how low we'll go from here in terms of further expansion in the future — and lemme tell ya, if I were a betting man, I'd sure as shekels say we haven't hit bottom yet.