Microsoft tells enterprises to be on Edge

Microsoft on Wednesday kicked off an Edge-is-for-enterprise effort, detailing the corporate features that have been baked into the under-construction browser so far and urging business users to give Edge a go.

"The Dev Channel now has enterprise features enabled by default and is ready for evaluation and supported by detailed deployment and configuration documentation," said the browser's makers in a post to a Microsoft blog. "We are also offering full support for deployment in pilot and production environments through our commercial support channels."

There are currently two versions, or builds, of Edge available to Windows and macOS users: Canary and Dev. The former is a rough build updated daily, while the latter is somewhat more reliable and stable, and updated weekly. Microsoft pushed enterprise IT administrators - and users - to try Dev. (A Beta build will eventually appear, but Microsoft now says it will "be available in the coming months," implying later rather than sooner.)

IT gets more GPOs, ability to block updates

In a special enterprise-focused section of the Edge Insider site, Microsoft has posted a .zip-format file that contains all the files - including ADMX and ADML files, and an HTML document - for using group policies on Windows and macOS machines to configure Edge in a managed environment.

Last month, Microsoft had previewed those same files and most of the group policies. It wasn't easy to find the files, though, since Microsoft had hidden them in a post on the Insider forum.

The current collection of group policy objects (GPOs) also includes those for managing Edge updates, something missing from the bunch previewed in June. One update-related policy, UpdateDefault, for example, lets administrators specify whether and how workers' copies of Edge use the Microsoft Edge Update service, a spin-off of the updater that handles Office. Policy configurations include disabling updates entirely, allowing manual updates and offering only periodic background updates.

Other policies can be set so that some or all users are allowed to, for instance, update the beta and stable channel builds of the browser, but not the rougher dev and canary versions.

"Customers will be able to control the flow of updates, either by leveraging our general updating mechanisms and using policies to pause updates at a particular version while testing compatibility with a small set of pilot users, or by using the provided offline installers (MSIs and PKGs) to push updates directly to their managed devices on their own schedule," Microsoft said in the Tuesday blog post.

A list of all currently-supported group policies for full-Chromium Edge is available on this support site. The update-related policies are listed separately here.

Microsoft has yet to integrate Edge deployment and management with its own Intune mobile device management platform - or third-party substitutes - but will, the company said. System Center Configuration Manager (SCCM) can be used to deploy the new browser, but like Intune, cannot currently configure Edge. Again, Microsoft pledged that SCCM - widely used in enterprise - would handle such chores at some future date.

Two months ago, when Microsoft showed off the new "full-Chromium" Edge - that name reflecting the browser's adoption of foundational technologies from the Google-centric Chromium open-source project - the firm touted a new Internet Explorer (IE) mode. Unlike the dual-browser approach taken by Windows 10 since 2015, the IE mode would, Microsoft said, "seamlessly render legacy IE-only content in high fidelity inside of Microsoft Edge."

Rather than open a second browser - IE11 on Windows 10 - when encountering a legacy website or app that required the ancient application, Edge will render IE content so that it is "visually like it's just a part of the next Microsoft Edge, providing users with the latest UI (user interface)."

IE mode is now ready to try and test in the Dev build on Windows. Because IE-inside-Edge relies on Enterprise Mode and the Enterprise Mode Site List - as does IE11 and old-Edge - IT can designate what sites are drawn by IE and which by Edge. Several group policies also allow IT administrators to customize workers' experiences. The InternetExplorerIntegrationLevel policy, for instance, lets admins choose to open IE11 (or not) when the employee calls up an old-school site or app.

(An interesting side note in the documentation referenced above: A short FAQ at its end includes the query, "Will IE mode replace Internet Explorer 11?" without actually answering the question. The closest Microsoft comes is when it says, "Internet Explorer is still a component of Windows..." with emphasis added by Computerworld. The word "still" suggests the current condition is not permanent, and that Microsoft will eventually eliminate the stand-alone IE11 and tell customers that their only option is to use Edge and its IE mode.)

Past, present and future

For the first time, Microsoft talked roadmap, albeit in general terms, to Edge's path in the enterprise.

Trumpeted features, including IE mode and 180+ group policies, that are already in place were joined with several - including the unified search it has pushed for Windows 10, as well as a corporate-focused new tab page that will integrate Office 365 - that have not yet rolled out in their entirety.

The Edge team referred to how it plans to deploy the second group of new features with the phrase "controlled rollout," reminiscent of the "controlled feature rollout" (CFR) phrase and acronym unveiled by Windows 10's makers this month. As in Windows 10, the intent seems to be to release Edge previews that will include off-by-default features that will be, assuming everything works as expected, switched "on" at some later date. Each feature will first be tested with a small subgroup; as bugs are uncovered and quashed, and Microsoft becomes convinced the feature works as intended without significant negative side effects, others will be added to the test pool. At some point, presumably, everyone has it enabled by default.

Future features - the roadmap didn't bother with dates - range from the already-mentioned Intune and SCCM support for deployment andconfiguration to Information Protection on Windows 10.

Even with the truncated list of features, Microsoft encouraged commercial customers to get going. "We believe that with today's announcement, the enterprise feature set is complete enough for most companies to start evaluations and pilots," the Edge team wrote.

Microsoft still has not laid out a timetable for finalizing Edge. While the mid-January retirement of Windows 7 would argue that the deadline should be soon - why craft Edge to work on that OS when the OS itself won't be supported? - at this point it's clear that Microsoft interest in the 2009 operating system is only to support corporate customers who pony up for the "Extended Security Updates" (ESR) available through January 2023. 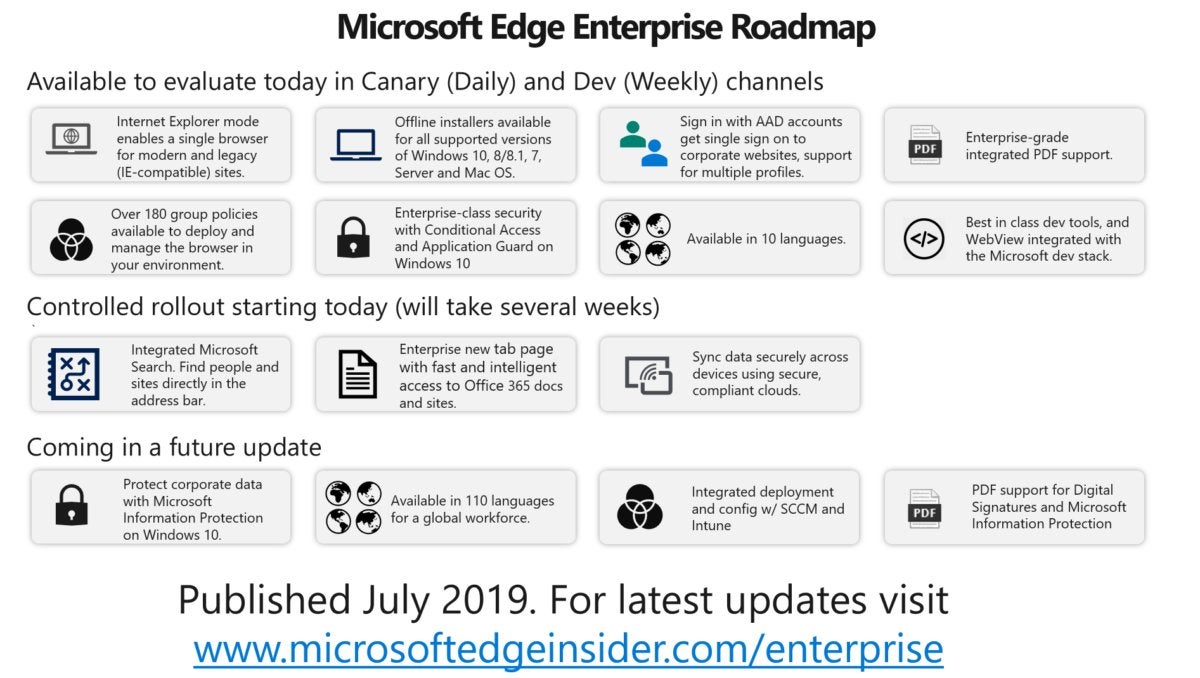 Microsoft's enterprise roadmap for 'full-Chromium' Edge may be rough, but the developer argued that there was enough there there to start piloting the new browser.