Microsoft's not-quite-ready-for-prime-time browser, the Edge built atop Google's technologies, will feature an enterprise-centric new tab page, one that IT administrators can customize for employees.

The Redmond, Wash. developer outlined Edge's new tab page capabilities for corporate customers a week after it announced the first release candidate" of the browser.

"When signed in with an Azure Active Directory (AAD) work account, opening a new tab in Microsoft Edge delivers a dynamic and personalized set of your most relevant Office documents, internal web sites, company resources, and other Microsoft 365 content," Chad Rothschiller, senior program manager, and Matt Betz, product marketing manager, said in a Nov. 12 post to a company blog.

[ Related: Excel: Your entry into the world of data analytics ]

Absent IT intervention through the setting of group policies, Edge in an enterprise will look and work just as on a consumer's PC, complete with a new tab page fleshed out from a feed of general news. But plug in GPOs (group policy objects) and the browser becomes a front end for Office 365, Microsoft's productivity software and service subscription. 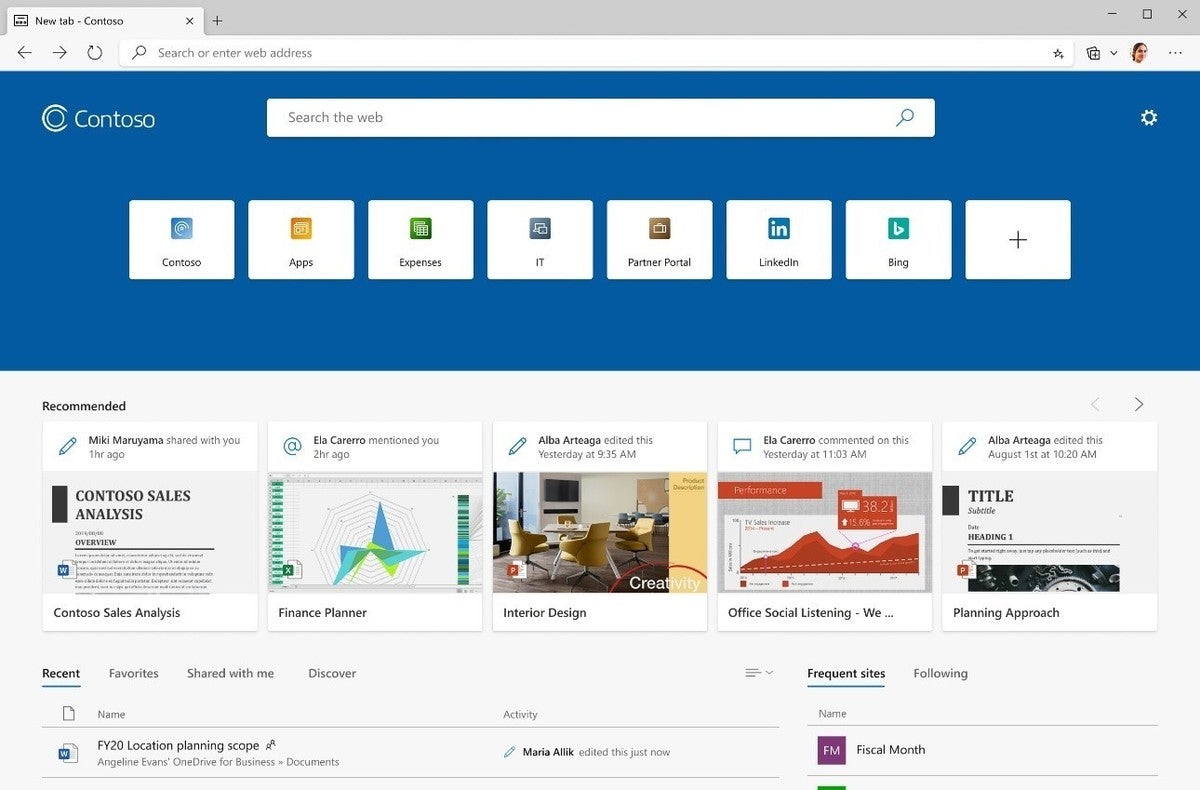 Office 365 users who log in to Edge through an Azure Active Directory account may see a new tab page integrated with the productivity suite and its services, from IT-mandated quick-click tiles to documents likely to need attention.

Each enterprise new tab page will boast eight thumbnails of selected sites, the first three of which can be set by IT (and set so that they cannot be changed by workers). Those sites might be important intranet pages or mission-critical web apps specific to the company at large, a department or team, or even the individual. The remaining five thumbnails - Edge allows only for one row of eight - will be based on frequently accessed sites or created by the device user, as is typical for other browsers' new tab pages.

(More information about the NewTabPageManagedQuickLinks policy that sets the first three thumbnails is available here.)

Other areas of the new tab page perform Office 365 landing page duties, the most notable of which, dubbed "Recommended," culls from recently-worked spreadsheets or collaborated-with-others Word docs or such like from signals derived from the user's interactions with the productivity applications and others in her company or team. Documents surfaced to Recommended must be stored in OneDrive for Business or SharePoint sites, not surprising since those are the two cloud storage choices for virtually all Office 365 corporate customers.

Below that, other Office 365 content is listed and access to SharePoint's intranet sites posted. Various views let users filter for pinned files or those, say, that have been received as email attachments.

The whole look and feel is very much akin to what an Office 365 user sees when steering to www.office.com in any browser, Edge included. The fact that Edge offers it on every new tab page makes for one less chore during a workday or, depending on how one sees the ever-present presence of Microsoft in the office, tiresome.

Microsoft, of course, views it as the former. "((The new tab page's)) Recommended Documents feature is the 'magic' that surfaces what you need most," contended Rothschiller and Betz. "It is the intelligence that monitors all file activity and uses machine learning to produce a short list of files, saving you time and allowing you to pick up right where you left off."

Also integrated with Office 365 is the search field on the new tab page. When the user logs in to an AAD account, searches bring results of not only the web in general, but also organization-specific information, such as documents (again, those stored in OneDrive for Business or on a SharePoint site), personnel and intranet sites hosting line-of-business web apps.

Rothschiller and Betz called out manageability - no shock there, as that has historically been a strength of Microsoft-made browsers - but didn't compare Edge with Chrome, the former's foe as well as its forerunner. It might have been a missed opportunity, as Chrome is not equipped to sport an enterprise-specific new tab page (presumably one linked to its G Suite) nor able to somehow integrate with Office 365.

Edge's first Stable build - production-ready, in other words - is set to launch Jan. 15. Until then, commercial users and IT administrators can kick the tires of the Beta, which can be downloaded from here for Windows and macOS.