Mozilla's revenue in 2018 fell by nearly 20% compared to the year prior, and for the first time expenses outweighed income, the organization said in its annual financial report.

The nonprofit behind Firefox implied that the apparent downturn was misleading because of the comparison to record revenue of the year before. "2017 was an outlier, due in part to changes in the search revenue deal that was negotiated that year," Mozilla said in the "State of Mozilla 2018" report published on its website.

Mozilla also asserted that the revenue decline would not affect its work. "Despite the year-over-year change, Mozilla remains in a strong financial position with cash reserves to support continued innovation, partnerships and diversification of the Firefox product lines," the organization wrote.

Most of the $451 million in revenue the Mozilla Foundation recognized in 2018 came from royalty payments, with the bulk of that produced by deals struck for Firefox's default search spot. Mozilla Foundation is the nonprofit that in turn runs Mozilla Corp., the commercial organization that actually develops and maintains Firefox.

According to Mozilla's 2018 financial statement released Nov. 21, the $451 million in overall revenue was $111 million less than in 2017, a plummet of 19.8%. The statement marked the first time Mozilla reported a year-over-year revenue decline in the 14 years that Computerworld has tracked the organization's financial health.

Of total revenue, $430 million, or about 95%, came from royalty payments. As always with Mozilla's revenue, the greatest portion of what the organization categorized as royalties came from search contracts. In 2018, those search deals accounted for 91% of all royalty revenue, Mozilla said, representing about $391 million. That was a whopping $110 million less than in 2017, a 22% decline. As with revenue, the search deal total was the first-ever search revenue slump in Mozilla's history.

A recap of Mozilla's search deals

Mozilla did not explain the massive decline in search revenue, other than the brief reference to 2017's number and how it was an "outlier."

Not coincidentally, those years — 2015-2017 — were when Mozilla banked the millions paid to it by Yahoo. In late 2014, Yahoo and Mozilla inked a contract under which the former paid the latter $375 million annually for removing Google's search engine from Firefox's default and slipping Yahoo's into its place.

But while the Mozilla-Yahoo deal was to run for five years, or until late this year, Mozilla had the right to skip out if Yahoo was sold. It was, to Verizon, which in mid-2017 completed a $4.5 billion acquisition of the former Internet giant. According to news reports, the new owner was required to pay Mozilla for the full length of the contract, or alternately, just the difference between Yahoo's $375 million and whatever Mozilla got out of a new partner.

Late in 2017, Mozilla did, in fact, nullify the remaining years of the contract with Yahoo. Not surprisingly, it restored Google as the default search in the U.S., Canada, Hong Kong and Taiwan.

Thus, the latest financial statement, including the much lower search engine revenue figure, represented the first full year of the renewed deal with Google.

(Until September, Mozilla and the renamed Verizon, a.k.a. Oath, were locked in a lawsuit over that contract and the money allegedly owed to Mozilla. Three months ago, that suit was dismissed when the parties settled out of court. Terms of that settlement were not disclosed. If Mozilla received monies as part of that settlement, they may show up on its 2019 statement, which will be released next year around this time.)

Total expenses for Mozilla's 2018 ran to $451.5 million, or half a million more than all revenue. That was a first for the organization. The previous close calls were 2013 and 2014, when expenses came within $19 million and $12 million of revenue, respectively.

Mozilla did cut some expenses during the year. The "branding and marketing" line item, for example — which climbed the most in 2017 — was cut almost 23%, from 2017's $66 million to 2018's $53 million. Advertising costs, presumably part of that branding line, fell by more than $12 million, for example.

And as Mozilla said in its status post, the organization "remains in a strong financial position with cash reserves" (emphasis added).

True. Mozilla appeared to on solid financial ground. Cash, cash equivalents and investments totaled $482 million, up $18 million from 2017. That rainy day fund could power Mozilla at its 2018 expense pace for 12 months, even if all revenue evaporated. At the rate of 2018's shortfall — the half-million difference between expenses and income — Mozilla has around a millennium or so to look forward to. 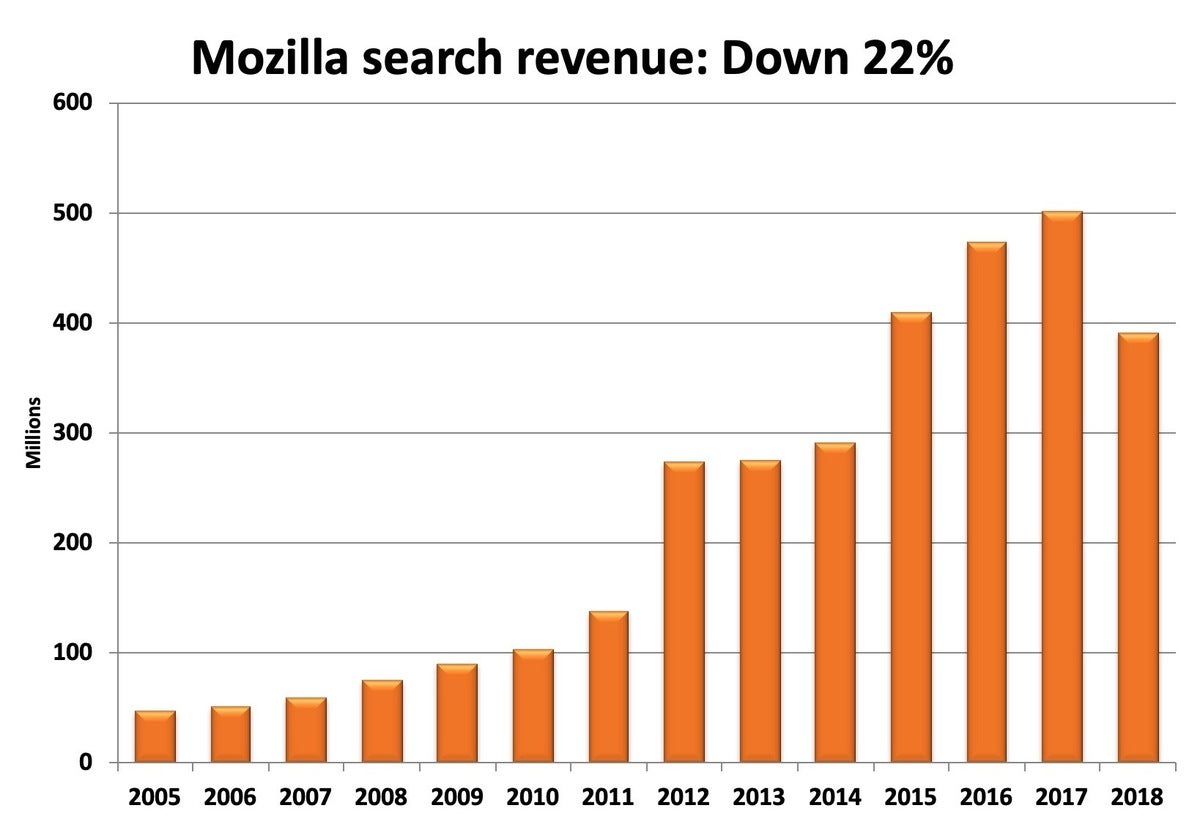 Mozilla's search revenue – a subset of total revenue –  plunged by 22% in 2018, falling to $391 million. That was one of several firsts in the organization's financial report.

As usual, some of the most important data about Firefox — which is equivalent to Mozilla, for all the organization's ongoing caveats — was missing from the 2018 report. Specifically, details about Firefox's usage, rather than financial, health.

Firefox, competitive only in the desktop browser market, dropped 1.4 percentage points of user share in 2018, according to analytics vendor Net Applications. Firefox ended the year accounting for approximately 9.6% of global browser activity, compared with 11% at the end of 2017. (In the 11 months of 2019, Firefox has slipped further, to 8.2%.)

Compared to Google's Chrome, which led the browser rankings with a monstrous 67.2% share at the close of 2018 (and hit the same mark in November 2019 after some downs and ups), Firefox is a fragile thing endlessly on the edge of ruin. That thought must be tempered, of course, with the reality that Mozilla's report comes from 11 months in the past and reviewed a year that the organization not only weathered but lived through almost all of the next without disappearing.

Share is important to all browsers because the applications are revenue generators for their makers in one way or another. Mozilla's interest is particularly sharp because other major browser developers — Google, Microsoft and Apple — have numerous revenue streams. Mozilla relies on search almost exclusively.

The organization continued its search (yes, pun intended) for additional sources of financing. "We're exploring paid and subscription service offerings as a complement to the free services we already provide," Mozilla said in its 2018 state-of-itself report, referring to toe-in-water efforts like a paid VPN and still-free Lockwise password manager and breach notification service Monitor.

There was evidence of additional revenue growth in Mozilla's annual dispatch. The line item "Subscription and advertising revenue," new in the 2017 report, grew from $2.7 million that year to $5.4 million in 2018. But that latter amount was still a pittance in Mozilla's scheme of things, smaller than, say, its interest and dividend income ($7.9 million).

But because of Mozilla's addiction to search, its survival depends on Firefox being able to bring users to a search engine. In a world where Firefox continues to shed users, search providers logically will have decreasing interest in paying Mozilla for the browser's default.

For all of Mozilla's transparency — exhibited by the State of Mozilla — the organization did not directly address the decline in share or spell out concrete steps it might take or try in an effort to reverse the trend.