Mysterious app keeps you from shutting down — or does it?

At last, we have a description of the mysterious shutdown-blocking G — and a fix for Microsoft’s G-generating bug coming in the next version of Win10, commonly called 20H1.

If you look online, you’ll see hundreds (if not thousands) of reports about Win10 shutdown getting blocked by a mysterious app called, simply, G. 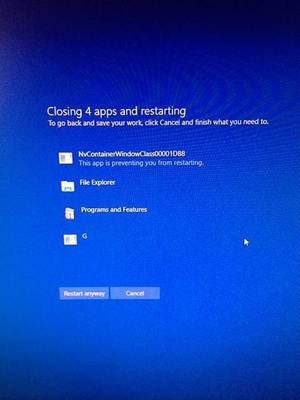 Most people assume it’s a virus, some other sort of malware or a harbinger of doom. In fact, it’s nothing of the sort. It’s a bug in the way Windows reports a specific kind of hang, and the bug has been fixed in the latest versions of Win10 20H1.

Some of you have reached out about when trying to shutdown, seeing a message saying that an app named “G” was preventing shutdown. We investigated and found an issue where windows related to GDI+were only referenced as “G.” We’ve fixed this, so going forward, these will now have the name “GDI+ Window (<exe name>)”, where <exe name> will show the .exe name of the app using GDI+.

In fact, people have been “reaching out” to Microsoft about this bug for years. I easily found six complaints on Reddit (1, 2, 3, 4, 5, 6) going back two years. General consensus on Reddit, and elsewhere, is that the afflicted machines are running malware of some sort or another. General consensus is wrong.

It’s a bug in the way the Blocked Shutdown Resolver pulls the name of the program blocking a shutdown, and “G” may result when there’s a GDI+ program (a program that draws stuff on the screen) that turns belly up as you’re shutting down.

Raymond Chen, one of my favorite Microsoft explainers, has a detailed (if weighty) discussion on the Developer Blog.

[ Related: Cortana explained: How to use Microsoft's virtual assistant for business ]

At the time the GDI+ library was written, it needed to support Windows 98, which had very limited support for Unicode. Therefore, it was compiled as ANSI and consequently used the ANSI versions of functions like Register­Class, like Create­Window, and Def­WindowProc to create and manage its helper window. The lack of Unicode support in the helper window didn’t really cause a problem because the window never displayed any UI and never processed any text. The window was there to do things like listen for WM_SETTINGS­CHANGE messages so it knew when to invalidate its caches. A few years ago, the GDI+ team did a little cleanup, and one of the things they did was get rid of support for Windows 98 and Windows Me...

So if you see that G is keeping you from shutting down, just go ahead and manually override it. No harm, no foul — and know that it’ll be fixed (finally!) when the next version of Win10 hits.