Ladies, gentlemen, aardvarks, and everything in between: Hell has frozen over. Or so it would seem this wacky winter.

Much of the Android-watchin' community's in a tizzy this week over word that Samsung — better known 'round these parts as the company that's never truly cared about timely Android upgrades — has actually managed to get the latest Android release onto some of its U.S. flagships within the same year of the software's launch.

It be true, all right: Multiple reports indicate Android 10 is indeed in the midst of rolling out to Galaxy S10 owners on Verizon, T-Mobile, and Sprint as we speak. And compared to Samsung's typical slow-as-molasses software delivery habit, well, that's quite the feat.

Heck, I've seen some folks saying this is the sign we've been waiting for — the sign that, hallelujah, Android upgrades are fixed! The days of endless waiting for rollouts are over! The core advantage of Google's Pixel phones is now nullified!

And to all of that, I say: Yeah — keep it in your pants. And let's keep it in perspective.

Now, credit where credit's due: Samsung absolutely does deserve some praise for doing a better job at getting its upgrade game underway this go-round. But, well, two things: First, the story is far from over. And second, the cause for celebration is very much all relative.

On the first front, we have to remember that as of this moment, only one of Samsung's flagships is receiving the Android 10 update. Samsung, as we all know, maintains two co-flagship devices with its Galaxy S and Galaxy Note lines. And all of the Note 10 models in America are still standing by with thus-far-empty virtual hands. So we're actually only halfway there — though with Android 10 apparently starting to trickle out to Note 10 owners in Germany right now, there's at least cause for optimism that things could progress further before long.

But there's more. Beyond that, we have to consider the previous-gen flagships that are also promised Android 10 upgrades. That's where most Android phone-makers outside of Google really drop the ball — in supporting their year-old devices, which are every bit as important as the current-gen models. In recent years, it's taken Samsung a solid two to three months extra to get updates out to its previous-gen flagships compared to its current-gen devices. And it's still too soon to know if and how this improved initial delivery will affect that piece of the puzzle.

And then there's the critical context to all of this — what I like to call the "it's all relative" factor. Plain and simple, let's not forget that this U.S. Galaxy 10 Android 10 rollout is starting 103 days after the software's release, which happened all the way back at the beginning of September. That's a 79%, C+ performance on my Android Upgrade Report Card scale (in and of itself, that is; a company's final, overall score also takes other factors, including previous-gen flagship delivery time, into account). It's a passing grade, to be sure — and a huge improvement over the failing scores Samsung's earned itself in recent years — but, c'mon, still not exactly an exemplary effort. When the bar's been set embarrassingly low for so long, "not entirely horrible" suddenly seems grand.

That being said, it is interesting to visualize how this result compares to Samsung's current-gen flagship rollouts from other recent years. When you look back far enough, you realize this timing is almost exactly in line with where Samsung was in 2014 — with that year's Android 5.0 (Lollipop) release. Following that rollout, the company got progressively worse with each passing Android version up until last year's Android 9 release, when it started a path of improvement that now appears to be continuing with Android 10 (though without the Note rollout yet factored into the equation): 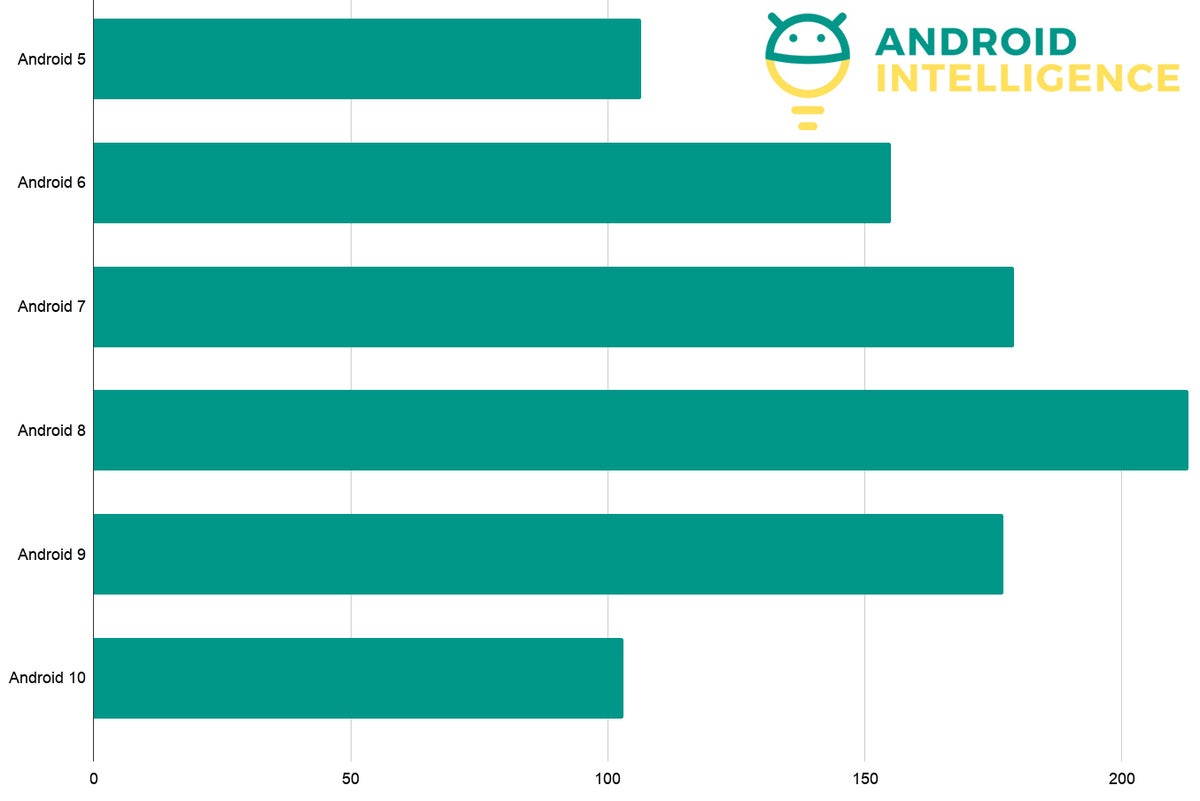 The number of days between each Android version's release and Samsung's first delivery to its current-gen U.S. flagship — with Note performance yet to be factored in for the Android 10 result. (Click chart to enlarge.)

So with Android 10, in other words, Samsung is on track to be more or less back where it was five years ago — provided that it manages to get the Note rollout underway soon. It's an improvement over its dismal performance in the Android 6, 7, and 8 eras, but seeing it in the bigger picture shows us that it's not actually a new achievement; it's just a (likely) return to the company's former level of adequacy.

Don't get me wrong: I'm delighted to see Samsung putting in a teensy bit of effort and doing notably better than its inexcusably poor performance of the past. But having closely observed this field across the entire Android ecosystem for so many years now, I hesitate to break out the bubbly just yet.

In this domain, consistency and trends are what ultimately matter. And right now, it's simply too soon to pass judgment on either of those fronts.