Per the Release Status Information page:

We are initiating the Windows 10 May 2019 Update [version 1903] for customers with devices that are at or nearing end of service and have not yet updated their device. Keeping these devices both supported and receiving monthly updates is critical to device security and ecosystem health. Based on the large number of devices running the April 2018 Update [version 1803], that will reach the end of 18 months of service on November 12, 2019, we are starting the update process now for Home and Pro editions to help ensure adequate time for a smooth update process.

The writing’s on the wall for version 1803 — the most widely used version of Win10. Microsoft’s going to stop patching it in November, and the push to get you off 1803 has begun.

Many people are using Win10 version 1903 without any problems. Some, though, are having a tough time. In particular, if you have a top-of-the-line Surface Book 2, you can’t get version 1903 — Microsoft has blocked it.

Given the underwhelming new feature set in 1903, and the fact that Microsoft hasn’t yet declared it suitable for paying customers (which is to say, enterprises), I continue to recommend that Win10 users hold off on the upgrade.

How this used to work, in theory

Once upon a time, less than a year ago, the ground rules for pushing Win10 upgrades were reasonably well understood.

In Win10 Pro, Windows Update advanced options, you set “Choose when updates are installed” to Semi-Annual Channel to start the countdown clock ticking when Microsoft declared the next version worthy of deployment to organizations. Then you set “feature update” deferral to 90 or 180 or 365 — the additional days tacked onto the date when the new version hit SAC.

Microsoft has changed the Windows 10 update terminology so many times it’s hard to keep track of the settings, what they used to mean, andwhat they mean now. In this case, “Semi-Annual Channel” now means “wait an initial 60 days after the new version is released before applying the deferral” — nothing more, nothing less.

Microsoft has a hand-waving explanation of how waiting for “Semi-Annual Channel” is, in effect, equivalent to waiting 60 days after release. That’s simply not true, historically — CBB and SAC time lapses have ranged from 45 to 150 days — but Microsoft doesn’t seem to be unduly influenced by the facts.

In Win10 Home you had very little choice, other than setting your internet connection to metered, turning off Windows Update entirely (which I don’t recommend), or using a third-party program to block updates (your mileage may vary).

How the push is supposed to work now, in theory

We know very little about Microsoft’s method for pushing Win10 1803 machines onto 1903.

There’s an algorithm (cough AI, cough ML) for selecting Win10 1803 machines to receive this special four-months-early putsch. We’ve heard a lot about it. Remains to be seen if it’s any better than the upgrade-to-1809 algorithm, which led to borked machines and permanently deleted files.

There’s also a promise of a kinder, gentler approach to pushing updates — the “Download and install now” link promised in several Microsoft missives, illustrated with official screenshots, and so poorly documentedit’s hard to tell what was intended.

In the best of all possible worlds, folks with 1803 machines that are destined to be pushed to 1903 will be presented with the “Download and install” option and the upgrade algorithm will back off until the link’s clicked.

So far, that doesn’t seem to be happening. Raise your hand if that surprises you.

An analysis of the upgrade algorithm

Reports of the forced upgrade are just starting to roll in — as you would expect with a cough AI in control of the release.

@abbodi86 has undertaken an exhaustive analysis of Win10 1803 Pro with KB 4499183 installed — that’s the second cumulative update for May, and appears to include the pushy code. Here’s what he found:

It appears as if the last test result is the source of the warning about imminent pushes to 1903. If you’re set up with SAC and have 0 days feature update deferral, it looks like you’ll be eligible for a pushed upgrade starting today: May 21 + 60 days = July 19 or 20, depending on how you count.

How the upgrade will progress

Here’s the part that concerns me the most because this forced-upgrade mess is going to happen to most Win10 users.

@abbodi86 reports that clicking “Check for updates” may not make any difference. Also, he can’t find any use of the “Download and install now” link.

Susan Bradley has a screenshot of an upgrade experience that’s, shall we say, suboptimal: 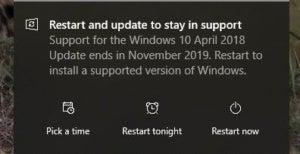 She was given the option to postpone the upgrade (“Schedule the restart”) by up to 35 days, but that’s it: 1803 is going away on this machine and — short of some Byzantine heroics — the machine’s getting pushed. That’s the bad news. The good news is that she was pushed onto Win10 1809, not 1903.

Microsoft hasn’t given us much indication of how this massive upgrade will proceed — we’re expected to trust the cough AI and follow instructions. We’ve seen, numerous times, how well that’s worked. The lack of the promised “Download and install now” link is particularly disturbing.

As @zero2dash notes, those of you running Win10 version 1803 set to Semi-Annual Channel and 120 days of feature update deferral (the settings I recommended for quite some time) are going to get pushed to 1809 on July 26. You won’t get pushed to 1903, thankfully, if the pattern holds true, but any version change is a wallop upside the head.

At least we don’t appear to be headed to another GWX-style bloodbath. At the same time, though, we also have no clear explanation for the disappearing deferral settings in Win10 version 1903 Pro. And we don’t know if/how Microsoft will respect the Win10 1803 Pro deferral settings as we approach Nov. 12.

Be of good cheer. All of this will change again when Microsoft releases version 1909, the “cumulative update” feature update (wotta concept!) that’s essentially Win10 1903 Service Pack 1. Hold onto your hat.

Without a clear road map from Microsoft, we’re back to crowdsourcing individual experiences. You’re most welcome to add your observations, and learn from the travails of others, on the AskWoody Lounge.