The older versions of Windows 10 are growing long in the tooth. Microsoft officially released its last cumulative update for Win10 version 1803 (Home or Pro editions) on Nov. 12. It’s scheduled to kill off Win10 version 1809 on May 12 of next year. If you currently run either 1803 or 1809 you should think hard about moving on to one of the next versions, either 1903 or 1909. The good news is that you can control your future version.

If you leave your version migration up to Microsoft, you’ll get pushed, ready or not. Fortunately, there are relatively easy ways to take matters into your own hands — yes, even for Win10 Home customers.

Which version are you running?

Start by determining, for sure, which version of Win10 you’re running. Down in the search box, type About and click About your PC. Scroll down a bit and you should see a Windows specifications pane like the one in the screenshot.

data is coming and going

That will tell you, crucially, which version of Win10 you’re running right now, and which edition you’re using — Home, Pro, Education, Enterprise, Pro for Workstations, LTSC, or a handful of variants. In general, the instructions here for Pro also include Pro for Workstations, Education and Enterprise, providing you aren’t attached to a network with an update server. (If you are so encumbered — er, privileged — you have to talk to your network admin to get upgraded.)

Which version do you want?

Each of the three available versions has significant features — and they aren’t the ones you’ll read about in the documentation:

Version 1809 — By far the most stable version at this point. It’s been baking out in the wild for almost a year and, in spite of a horrendous rollout, has had few hiccups lately.

Version 1903 — Has been in final beta testing (er, release) for six months, and in Microsoft’s nebulous “ready for broad development” corral for two months. Each cumulative update still contains enormous numbers of small fixes, combined with a few epic, lingering bugs. That said, 1903 has the single most important feature improvement ever in Win10: The ability for everyone to Pause updates. That’s powerful incentive for all Win10 users, especially Home users, to move to 1903.

Version 1909 — The minimally invasive “service pack” version — has a few bugs of its own, mostly Explorer Search related, but it’s only been available for a few weeks. If you trust Microsoft’s patching ability, there’s no reason to delay moving to 1909. On the other hand, if you want to wait and see what happens, you’d be well advised to wait a couple of months or more.

Most importantly, if you’re running Win10 Home — either 1803 or 1809 — you want to jump ahead to 1903 right away. All of the known and unknown problems with 1903 pale in comparison to the ability to pause updates.

In the past, I and many other experienced Windows victims have recommended that Win10 Home users pay $100 or so to upgrade to Pro. With Home 1903 (and 1909) and the pause update feature, I no longer recommend upgrading to Pro — Home should be just fine for almost everybody. With Win10 1903 Home, you’re no longer a beta-testing guinea pig.

How to upgrade Win10 Pro

If you’re running Win10 Pro (Education, Enterprise, etc.) and you want to move on to a later version, here’s how to land where you want.

There’s a chance that changing versions will completely hose your computer, or leave your machine tied up in automatically installed knots. Make a full system image backup before you venture down any path.

I have long recommended both Macrium Reflect Free and EaseUS Todo Backup. Don’t rely on the built-in Windows backup, which dates back to Win7 days and is notoriously unreliable.

Upgrading Win10 Pro version 1903 to 1909 is quite straightforward; I have “Download and install now” recommendations in an earlier Computerworld post.

From Win10 Pro version 1803 or 1809, it’s relatively easy to adjust Windows Update to have it land on the version that you want. Using an administrative account, click Start > Settings > Update & Security. Then click Advanced Options at the bottom. See the screenshot.

The mathematics is a bit hairy, but you want to set the feature update deferral days so Windows Update will land on your chosen version.

If you’re running Win10 1803 or 1809 and want to move to version 1909, choose Semi-Annual Channel and 10 days feature update deferral. Or you can skip the middleman and upgrade online using the Windows Media Creation Tool. (Yes, the “Windows 10 November 2019 Update” is version 1909.)

“X” out of the Windows Update advanced options settings dialog.

Don’t do anything else. In particular, don’t click “Check for updates.” Just use your PC as usual, possibly turning it off then on again to awake the upgrade genie. You may have to wait a day, but sooner or later you’ll get upgraded to the version you’ve chosen.

There’s a tiny chance that your PC will be proactively blocked from upgrading, usually as a result of recently discovered hardware, driver and software incompatibilities. Those are usually listed on the Release Information Status page. At least in theory, you don’t have to sweat the details — Microsoft should hold off on the upgrade until your machine passes muster.

How to upgrade Win10 Home

If you’re already on Win10 version 1903 Home, you’re in good shape. Simply avoid clicking on the 1909 Download and install now link (screenshot) and you’ll stay on 1903 until the end of time. Or until Microsoft changes its mind, anyway. 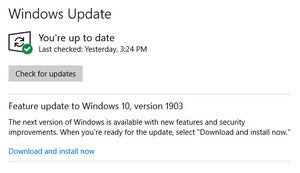 For those of you on Win10 version 1803 or 1809 Home, there are some additional hoops. Note that I strongly recommend Win10 version 1803 Home folks upgrade to 1903, skipping 1809, specifically so you have access to the new Pause Update feature.

Here’s how to choose the version you’ll get.

Just as in the Pro/Education editions, there’s a chance that changing versions will completely hose your computer, or leave your machine tied up in automatically installed knots. Make a full system image backup before you venture down any path.

Once again I recommend either Macrium Reflect Free or EaseUS Todo Backup. Don’t rely on the built-in Windows backup, which dates back to Win7 days and is notoriously flaky.

Step 2. Let Windows Update run its course, if you can

If you’re already on Win10 1903 Home, you have full access to the Pause Updates feature. I talk about the proper settings every month on the day before Patch Tuesday. (November’s alert looks like this.) Follow those recommendations, and you’ll stay patched without getting thrown to the beta testing wolves. When you’re ready to move to Win10 1909 Home, you can click the link to Download and install now.

If you’re on Win10 1803 or 1809 Home and moving to Win10 1909 Home, you can simply remove any updating blocks you may have (such as setting your internet line to a metered connection) and let Windows Update run its course. Alternatively, you can use the Windows Media Creation Tool page and get upgraded directly.

Step 3. Install from a saved ISO, if necessary

The  other permutations aren’t so simple.

There are tricky ways to avoid using the ISOs — you can even manually block the 1909 upgrade — but for most people, the ISO approach is convoluted enough already.

Step 3a. Retrieve the correct ISO

If you don’t have a clean ISO to work from, there’s a phenomenal batch program from AveYo available on pastebin that lets you choose and download (from Microsoft!) the official older ISOs. Go to AveYo’s MediaCreationTool site on pastebin. On the upper right, click Download. With an administrator account, right-click on the downloaded MediaCreationTool.bat file and choose Run as administrator. You may need to click through “Windows protected your PC” screens (click More info, Run anyway) but in the end you’ll have a list of ISOs to choose from (screenshot). 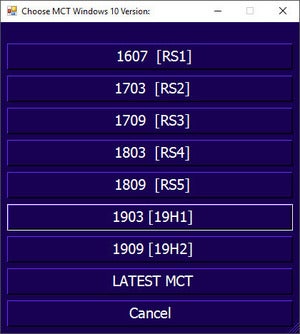 Click on the version you want. Windows takes a while to download the package, but in the end, you’re tossed directly into the Win10 installer, as described in Step 3b.

Step 3b. Install Windows from the ISO

If you have an ISO file and want to use it to upgrade your Win10 Home version, using an administrator account, double-click on the ISO file, then right-click setup.exe and choose Run as administrator. The Win10 installer kicks in and will guide you through the process. You have the option to either install clean, or to keep your files and settings (“Choose what to keep”) and install the new version.

Restart your machine if you haven’t been forced to do so already, and you’ll be running that new version.

You can double-check that the upgrade succeeded by typing About in the search box and looking for the version number.