The difference between Defer updates, Pause updates and Delay updates — and what happens with Win10 1909

Yes,  there’s a difference between Defer updates and Pause updates. But that’s just the tip of the micro-plastic-infused iceberg.

The main sticking point: Win10 still has both concepts floating around, they conflict, and we don’t have any idea how the conflicts are being resolved — a problem that’s going to get worse with the release of Win10 version 1909, which doesn’t follow the Defer, Pause, push, pull or prod rules.

This time the name change — Deferred updates, Paused updates — masks a Gordian knot of settings in various places, with conflicts galore. Be of good cheer. When Microsoft pushes Win10 version 1909 into the mix next month, we have yet another update with a new pedigree.

If you scroll down the Windows Update Advanced Options pane for Windows 10 Pro versions 1803 or 1809, you see the old Deferral settings (screenshot). 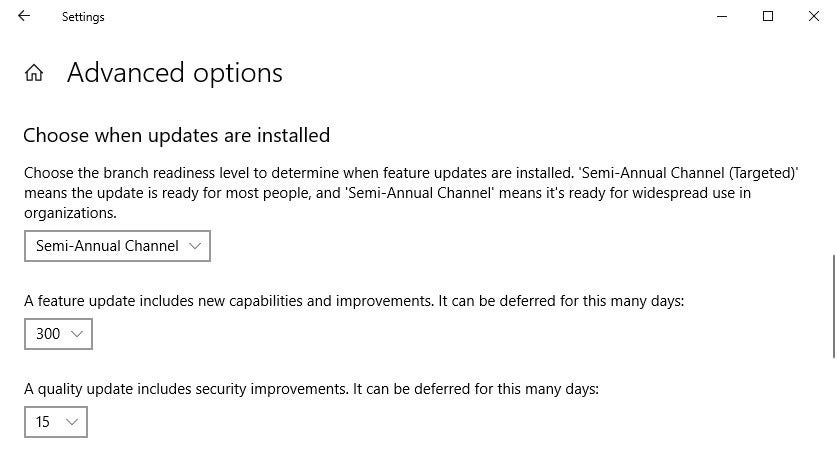 Although you can see the settings right there in black and white, they’ve been kicked under the bus. Back in February, “Semi-Annual Channel” was retroactively defined as “wait an extra 60 days on version upgrades.” Nonetheless, the other two settings — deferral settings — still have effect.

In practice, the meaning of Deferred updates in Advanced Options is reasonably clear:

“Feature update … deferred for this many days” means that Windows Update will refrain from installing a new version of Win10 for the specified number of days after the new version is posted. There’s a little squishiness in the “posted” part — Win10 version 1809 being a case in point, with its horribly botched rollout over different days — and you may have to add 60 days depending on the Channel setting. But, well, Microsoft.

“Quality update … deferred for this many days” means that Windows Update will wait the specified number of days after a cumulative update is pushed before it gets installed. Note in particular that some months — like September — have two pushed cumulative updates. The deferral applies to each pushed update, in turn.

In both cases, we’re talking about the number of days that pass after the patch is released. The day you adjust the setting doesn’t make any difference, although if you change the setting while a deferral is in effect, the new setting takes precedence.

There are more changes coming. The upgrade to Win10 version 1909 apparently isn’t constrained by the Deferred update setting — there’s an independent “Download and install now” prompt.

Confused? Yeah. You aren’t the only one.

Paused updates are a different kettle of fish entirely. Win10 version 1809 has a “Pause updates” slider in Advanced Options, but it only pauses for 35 days; there’s no finer setting.

Win10 version 1903 has a plethora of pausing options. On the Windows Update main screen, you have a button marked “Pause updates for 7 days” (screenshot).

Click that button and it’s replaced with another that says “Pause updates for seven more days.” You can click the button up to five times and each click adds seven more days to the pause.

Dig deeper into the Advanced Options pane and you see the ability to “Pause updates until a specific date.” This pause, though, maxes out at seven days — an odd limitation, considering the 5 x 7 multi-click option on the main page. (Note that earlier versions of Win10 Pro 1903 allowed date-by-date pause extensions for up to 35 days. That’s no longer the case, per a clean install yesterday of build 18362.356.)

When you pause updates, the pause takes effect from the point you set it. So if, on Oct. 1, you click three times to pause updates for 21 days, all cumulative updates will be held back until Oct. 22. Once Oct. 22 rolls around, though, you get the most recently pushed cumulative update — which may not be the one you thought you were blocking.

So what’s a “Delayed update”?

As best I can tell, there’s no official Microsoft definition of the term. It doesn’t appear in any of the current versions’ settings.

Think of it as a generic term that may mean either Deferred or Paused updates, or both, in any combination.

The case of the disappearing 1903 deferral settings

When you install a clean copy of Win10 Pro version 1903, you see the Deferral settings shown in the first screenshot in this article. If you change any of the settings, on reboot the whole settings section disappears. I talked about that rather shocking revelation back in June.

I have no idea why it happens, and as best I can tell, Microsoft has never discussed the disappearing deferrals.

Many of the defer and pause update options you see in the Settings app are available under the covers through the Group Policy Editor. (Remember, again, that we’re talking about Win10 Pro, Education, and maybe Enterprise, depending on your admin’s settings. This doesn’t apply to Win10 Home.)

To see what’s happening down there, start gpedit.msc and navigate to Computer Configuration > Administrative Templates > Windows Components > Windows Update. There you’ll find a bunch of defer and pause options, with the mother lode under Windows Update for Business.

As you might expect, there’s a real hornet’s nest of settings, some of which work, many of which don’t, and the conflicts are glaring. For example, in Win10 1903 the Windows Update for Business > Select when Quality Updates are received setting says that you can pause quality updates — but that pause will last for 35 days. Period. There’s no seven-day option, no variable number of days option. It’s 35 days and that’s it.

In Win10 version 1809, though, the analogous setting gives you a chance to specify the date Pause starts — and then it goes for 35 days.

As is all too common with Group Policy, there’s no apparent relationship between what’s in the Settings app and what’s in effect under the hood.

Don't get me started on the Registry values underpinning all of this mayhem.

Conflicts. Oy, we got conflicts.

So what happens when a Pause and a Deferral collide? Or when a Group Policy conflicts with something you can see in the Settings app?

Short answer: It’s complicated. Longer answer: The exact resolution seems to vary depending on which build of what version you’re using.

PKCano undertook an extensive testing of the conflicts between Group Policy, Settings app, and what actually happens back in July. The results are ugly, to say the least. Since then there have been numerous attempts to reconcile conflicting Defer, Pause, Settings app, GP settings and values in the Registry — and it’s an unholy mess.

My main observation — not backed by any exhaustive research, but just from listening to the howls of patching pain — is that Windows Update tries to honor all five sources of settings, and usually opts to hold off if any of them say to block an update.

At this point, it looks like the Win10 version 1909 announcement arrives as part of a cumulative update, and it’s only installed if you explicitly click on “Download and install now.” Whether the appearance of the announcement is subject to Defer or Pause update rules is an unknown at this point, but it seems likely that installation of Win10 version 1909 will be wholly dependent on clicking yet another link, ignoring any other Defer or Pause setting, either in the Settings app or in Group Policy.

Which is good. Anything to break free of this patching tar patch.

The future’s unclear at this point. Just for starters, we have no idea if Microsoft will continue to deliver a major Win10 upgrade in March followed by a Service Pack in September. The Service Pack, also known as an optional feature update, or an “Enablement Package” (sheesh), likely won't follow any of the old Defer or Pause rules — although it may mimic version 1909.

Of course, we don’t know for sure. Microsoft hasn’t told us.

Heaven only knows what will happen when version 1903 gets within four months of end of support. Then we enter uncharted waters once again.