The most important thing to check before buying a Chromebook

When it comes to upgrades, Chrome OS and Android couldn't be more different.

Since Chrome OS can't be customized by device-makers in the way that Android can, y'see, Google's able to control Chromebook updates completely on its own — and that means pipin' hot software can roll out to all current devices within days of its release, regardless of who made each laptop or where it was purchased. (And, uh, yeah: Suffice it to say, the same can't exactly be said for Android.)

That's a valuable assurance to have, especially when you're spending hundreds of dollars on a computer you'd ideally like to use for a while. But as with many things in life, Chromebooks do have built-in expiration dates — points at which they'll no longer receive operating system updates and thus won't be advisable to use. And no matter what kind of deal you think you're getting on a Chromebook, the ultimate price you're paying is really all relative to that one variable and how long it allows the laptop to remain viable.

We've talked about how on Android, in order to figure out a phone's true value, you have to think about the amount of time the device will receive OS and security updates and then do a little math to calculate its annual cost of ownership for advisable use — since once a phone is no longer receiving said updates, it's no longer advisable to use for anyone who prioritizes an optimal level of privacy, security, and performance. And you, as the intelligent, fresh-smelling, forward-facing mammal that you are, clearly know the importance of those factors.

Well, guess what? The same exact principle applies to Chromebooks — maybe even more so, given how often software updates arrive on the Chrome OS front (every two to three weeks for minor fixes and every six weeks for more significant revisions — whew!). And just like with Android, it's up to you to perform those calculations, think about a device's lifespan, and determine whether it's actually a smart purchase before you plunk down your hard-earned shekels.

The good news: None of that's difficult to do. Not even remotely. The main problem is just that the companies making Chromebooks don't want you to think about this sort of stuff — for reasons that aren't hard to figure out — and consequently, they don't make any of this information (or even just the idea that there's a need for any of this information to exist in the first place) easily discoverable. That's why the vast majority of Chromebook shoppers are woefully ignorant in this area.

But now, you don't have to be. Polish up your person-face, perform a few gentle stretches for good measure, and prepare to be enlightened.

All right, first things first — a little pertinent context to this whole situation: With Android, most devices are expected to receive operating system updates for two years from the time they launch (in theory, anyway — hello, Moto!). Google's Pixel phones are the sole exception, with a guaranteed three years of OS update and security update support.

With Chrome OS, things aren't quite so simple. On the Chrome front, Google promises six and a half years of software updates from the time a chipset first appears on the platform. For most of us, that doesn't mean much; even if the Chromebook you're thinking about buying was announced a mere two weeks ago, it's entirely possible another Chromebook came out using the same CPU six months ago. So unless you follow Chromebook development far too closely for your own health, you're never gonna know what to expect in terms of timing.

The simple solution is to bookmark this somewhat obscure link — bookmark it now and bookmark it hard! — and then always, always, always check that page before considering any Chromebook purchase. The page is Google's official Chromebook end-of-life database. On it, you'll find a list of every Chromebook ever made and, crucially, when each one will (or did) receive its final software update. 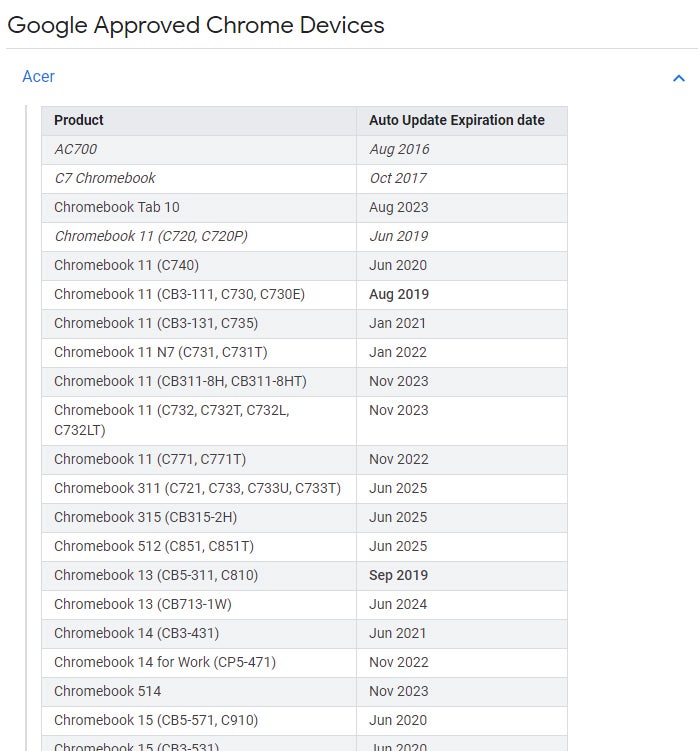 So many Chromebooks, such little time.

With that all-important info in hand, you can start doing some smart math. Just like we did for Android phones, simply divide the total asking price of the Chromebook you're considering by the number of years of active upgrades it has remaining. That'll give you the actual annual cost of ownership for advisable use, which tells you far more than the number on the device's price tag.

For instance, if you found a Pixelbook on sale for $800, you could see that the Pixelbook is set to get updates all the way through June of 2024 — so you'd divide 800 by those five remaining years and learn that it's gonna cost you about $160 for every year you're able to use the computer advisably.

That'd be valuable information to have as a comparison if, say, you found a cheap-o Chromebook on sale somewhere for $150 — but then looked it up in that database and realized it was set to stop getting updates within about a year. That's not an entirely uncommon thing to have happen with eye-catching fire sales, and that's why this next-level thinking is especially important. In a case like that, you'd actually do better going with a more expensive system when you think about it in a long-term, annual-cost sense (even before you factor in how much nicer of a laptop you'll end up having).

Plain and simple, a Chromebook's base price only tells you so much. What matters more is how that cost looks over the course of the device's remaining life — however many months or years that may be. And now, you're armed with the knowledge you need to make that much more meaningful assessment.

So go forward, you wise oxygen-requiring animal. Go forward and purchase your next Chromebook with confidence aplenty.