Facebook's plans to launch its own Libra cryptocurrency next year is getting resistance from France and Germany who have promised to block it and plan to create their own national cryptocurrencies.

Last week, the two nations said Libra could threaten the Euro's value and unlawfully privatize money. Last year, the Reserve Bank of India (RBI), the country's central bank, announced a ban on the use of cryptocurrencies by any regulated financial entity because of risks associated with it.

"My guess is all these [nations] are concerned about the potential implications for monetary policy," said David Furlonger, a vice president of research and Gartner fellow. "And, when there's a private entity that has the amount of potential customer involvement and, therefore, potential monetary flows as Facebook has, then these countries are concerned about the impact it may have on their ability to adequately implement policy that would be beneficial to their own nation."

[ Related: The top 5 problems with blockchain ]

China, too, has worked to limit bitcoin, first by clamping down on initial coin offerings  and then bitcoin mining pools; it may be planning its own digital currency.

Amid an ongoing trade war with the U.S., China may also be looking to create a way to usurp the U.S. dollar as the de facto business currency, according to Felix Shipkevich, principal attorney at New York-based lawfirm Shipkevich PLLC.

Some experts believe because Facebook has more than two billion users, even a small percentage purchashing an average of a couple hundred dollars of Libra could have an enormous impact on economies around the world – and make the social network a de facto reserve bank.

"Given what their ambitions might be, I might start referring to them as Facebook Bank," said Clifford Rossi, a finance professor at the University of Maryland's Robert H. Smith School of Business. Facebook's entry into the banking arena puts added pressure on commercial banks at a time when they are already scrambling to learn how to compete against nimbler, tech-savvy fintech companies.

Worldwide, blockchain-derived business value is forecast to grow from $9 billion this year to $50 billion in 2022, according to Gartner. The greatest growth between now and then is expected to take place next year, when Facebook plans to launch the Libra coin and Calibra digital wallet; that year alone will see a 128% annual increase in business value. All digital currencies require an online or offline digital wallet, where they can be stored until used.

In a series of tweets Monday, Marcus said Libra is simply designed to be a better payment network and system running on top of existing currencies, "delivering meaningful value to consumers all around the world."

"Libra will be backed 1:1 by a basket of strong currencies. This means that for any unit of Libra to exist, there must be the equivalent value in its reserve," Marcus wrote. "As such there's no new money creation, which will strictly remain the province of sovereign Nations."

Like other efforts to create cryptocurrencies for commerce, Facebook would tie its Libra to a fiat currency, either the U.S. dollar or other local national currency, creating what the industry refers to as a "stable coin." The threat posed by Facebook's Libra project, some believe, goes beyond commercial banking to central and reserve banks.

Last Thursday, French Finance Minister Bruno Le Maire said Libra should not be allowed to operate in Europe while concerns persist about sovereignty and persistent financial risks, according to Reuters. 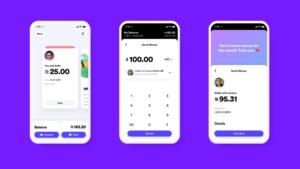 The Libra crytocrurency app, expected to launch next year.

On Friday, France's finance minister, Bruno Le Maire, and his German counterpart, Olaf Scholz, released a joint statement saying their respective countries are willing to tackle cryptocurrency challenges, such as financial security, investor protections, prevention of money laundering and terrorism financing. The G7 has also tasked a working group to assess the challenges posed by cryptocurrencies; that report is expected in October.

"As already expressed during the meeting of G7 Finance Ministers and Central Bank's Governors in Chantilly in July, France and Germany consider that the Libra project, as set out in Facebook's blueprint, fails to convince that those risks will be properly addressed," the joint statement read. "We believe that no private entity can claim monetary power, which is inherent to the sovereignty of Nations."

At the G7 meeting, the 19-country euro zone bloc indicated it is united in pursuing a tough regulatory approach should Libra seek authorizations to operate in Europe.

"When you think about how many Facebook users there are, you realize it is in some ways a digital nation," said Cindy Yang, a partner and team lead for the fintech industry group at New York-based law firm Duane Morris LLP. "So, the idea that they're going to allow people to use Libra as a transactional digital currency within the system, and the idea that people could put in whatever currency they wanted – whether a Euro or a U.S. dollar – it does take that money out of circulation. So that does have inflationary pressure."

Libra is also disconcerting to national security authorities, especially the U.S. Treasury, which relies heavily on people using the U.S. dollar through established international clearance and settlement systems, such as SWIFT and other financial payment rails, Yang said.

"When you look at the House Finance Committee hearings [on Libra], one of the key questions that wasn't answered, surprisingly, was how much does Facebook think, on average, a person would hold in digital currency. He [David Marcus] couldn't even answer that question, which seemed odd because you'd think they'd done some forecasting."

Shipkevich believes Facebook's Libra could not only cause economic turmoil, but could allow the social network itself to become the de facto central banking authority for a developing country, or one in turmoil, like Venezuela.

"If you're Facebook and maintain 10% of Venezuela's local currency through Libra, you become a quasi-federal reserve for that system," Shipkevich said. "My first reaction to Libra was, 'Are you kidding me?' How are we just 10 years after global Great Recession allowing a single company to be able to potentially control the federal reserve systems of developing countries?

"Essentially, Facebook could become too big to fail," he said.

The social network has garnered strong industry support for its proposed digital currency; it formed the Switzerland-based Libra Association, which currently has 28 members, including Mastercard, Visa, eBay, PayPal, Uber and Lyft.

Dante Disparte, the Libra Association's head of policy and communications, said in a statement the group is "committed to working with regulatory authorities to achieve a safe, transparent and consumer-focused implementation of the Libra project." 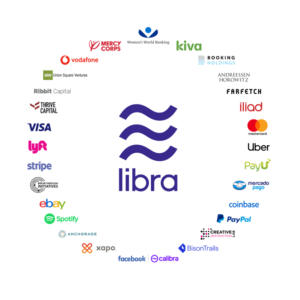 Stable coin projects, like IBM's Blockchain World Wire, have targeted developing nations where citizens have few or no options to open a bank account and are forced to use expensive remittance services to send money home if they're working outside their home country.

Facebook's Calibra digital wallet app is being developed to show international exchange rates for changing fiat currency, like the U.S. dollar, into Libra digital currency and back again. Because it's based on blockchain, Facebook is cutting out the middleman – a central bank or clearing house; that eliminates the majority of costs associated with financial transactions today.

"Transaction fees will be low-cost and transparent, especially if you're sending money internationally. Calibra will cut fees to help people keep more of their money," Facebook said.

The underlying blockchain transactional network will be able to handle thousands of transactions per second, and data about the financial transactions will be kept separate from data about the social network, according to Faceook's Marcus, the former president of PayPal who now leads Facebook's new digital wallet division.

Gartner's Furlonger said multiple countries, including the U.S., believe there's still "a lot uncertainty around Libra itself and how it would actually work.