Microsoft has focused its Windows 10 attention on upgrading hundreds of millions of machines before they lose rights to security updates in three months.

From June 26 to July 25, the portion of all Windows 10 systems running the May 2019 Update, a.k.a. 1903 in Microsoft's four-numeral format, almost doubled, climbing 5 percentage points to 11.4%, according to analytics company AdDuplex.

The likeliest explanation for the changes — 1903 up, 1803 down, 1809 flat — was Microsoft's July 16 announcement that it had started forcible upgrades "for customers with devices that are at or nearing end of service and have not yet updated their device."

Windows 1803 is the only version that meets the "at or nearing end of service" requirement: It is to fall off the support list Nov. 12.

Managed PCs can be upgraded to a version other than 1903, but those that have been left for Microsoft to service — every consumer system and many small- and even mid-sized business devices — now running 1803 will be pushed onto 1903 because of an April upheaval to Windows 10's upgrade model. It was then that Microsoft said it would add a "Download and Install Now" (DaIN) option to Windows 10 Home and Windows 10 Pro, for the first time giving users of the former control over when they moved to a newer version of the OS. But to maintain a secure ecosystem, Microsoft reserved the right to intervene when an upgrade's support lifecycle came to a close. 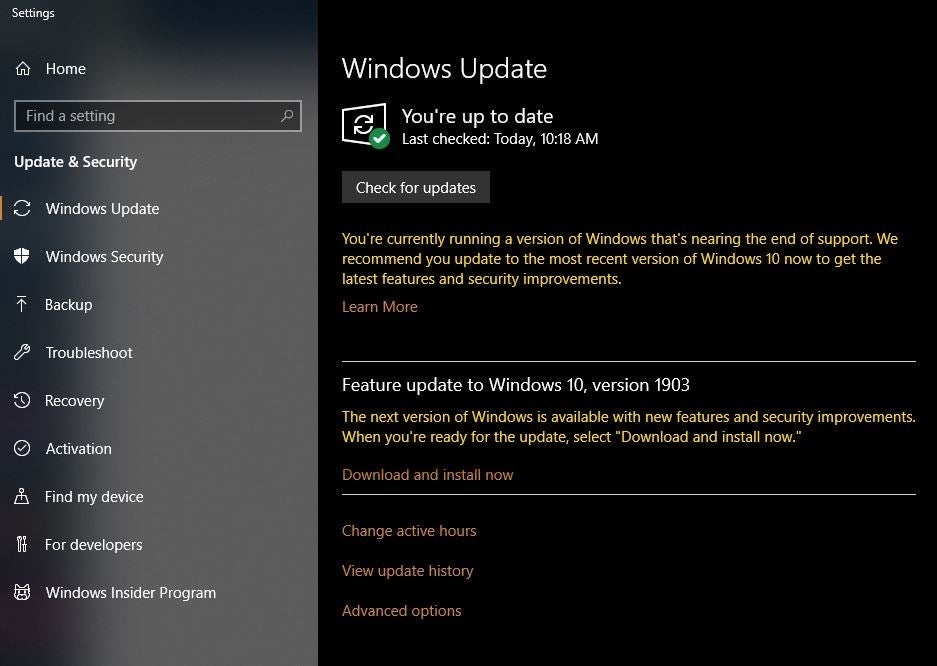 This copy of Windows 10 Pro 1803 is being warned that it's getting close to end of support (top yellow text) and that it's ready to upgrade to 1903 at the user's discretion (lower text). If the user doesn't pull the trigger, Microsoft will.

As early as March, AdDuplex's data signaled that Microsoft had largely abandoned efforts to distribute the October 2018 Update, a.k.a. 1809. Computerworld predicted that Microsoft would handle the months-long delay in re-releasing 1809 by skipping that version and getting users onto 1903 when that launched.

That's exactly what the latest AdDuplex data indicated: Microsoft pushed 1903 at PCs running 1803 because of the impending support deadline. At the same time, Microsoft didn't disturb systems already running 1809 because on Home and Pro it's to receive security updates for another nine months (until May 12, 2020).

It remains unclear whether this year's changes — the DaIN option first, then the July revelation that the fall 2019 feature upgrade would be mostly without new features and would resemble the long-discarded service packs of Windows XP, Vista and 7 — organically grew out of the 1809 debacle and delay, or whether Microsoft had plans already in the works to give consumers upgrade oversight and turn Windows 10's release cadence into a major-minor tempo. In the end, it doesn't really matter.

What does — assuming AdDuplex's data accurately paints Windows 10's fragmentation — is that Microsoft has just three months to move the majority of 800 million-plus PCs off 1803 and onto something newer, presumably 1903. (Microsoft could, Computerworld supposes, upgrade the last month-and-a-half 's worth of 1803 PCs to the very latest, 1909, after that service pack-like version releases in September. But that would be a much bolder move than Microsoft typically takes.)

The 90 days, give or take, remaining before Windows 10 1803 loses support is not an insurmountable obstacle: Microsoft has upgraded more than half of its Windows 10 base in that amount of time before. For example, over 50% of Windows 10 PCs shifted to 1709 within two months of its debut. For that matter, the same happened with last year's 1803.